Not to be confused with Celesta.

Celestia is a 3D astronomysoftware program created by Chris Laurel. The program allows users to virtually travel through a simulated version of our universe. Celestia can display objects of various scales using OpenGL.[note 1]

Celestia is available for AmigaOS 4,[6][7][8]Linux, macOS, Microsoft Windows, iOS,[9] and Android.[10] It is free and open source software released under the GNU General Public License.

Celestia is available for download from free software websites. Between 2001 and May 2017, the former central distribution site SourceForge counted approximately 12 million downloads.[16]

Celestia displays the Hipparcos Catalogue (HIP) of 118,322 stars and a compiled catalogue of galaxies. Celestia uses the VSOP87 theory of planetary orbits to provide a solar and lunar eclipse finder and to display the orbital paths of planets (including extrasolar planets), dwarf planets, moons, asteroids, comets, artificial satellites, and spacecraft.

Using the installed catalogues, the names of celestial objects can be displayed, including artificial satellites, as well as the names and locations of Earth features.

Celestia allows users to navigate at different speeds, and allow users to orbit stars, planets, moons, and other space objects, track space objects such as spacecraft, asteroids, and comets as they fly by, or travel to and/or fly through galaxies. Light time delay is an optional function.

The time simulated by Celestia can be set to any time 2 billion years forward or backward from the present, although planetary orbits are only accurate within a few thousand years of the present day, and date arithmetic overflows at the year 5,874,774.[citation needed]

Celestia simulates the appearance of atmospheres on planets and moons, planetshine on orbiting satellites, and miscellaneous planetary details such as sunrise and sunset. Information about the objects that Celestia draws can also be displayed.

The user can change Celestia's field of view, and allows users to split the window into multiple panes. Screenshots and movies can be captured in classic or HD resolutions. Celestia's support for gamepads and joysticks is relatively limited.

Celestia can be extended with new objects, and has support for third-party, user-created add-ons available for installation, both fictional and realistic. The extension mechanism uses Lua as its built-in scripting language.

The default setting for Celestia's Earth is a spheroid. The irregular surface of the Earth causes low Earth orbit satellites to appear to be in the wrong places in the sky when watched from Celestia's ground, even when the Earth's oblateness is specified.

Many types of astronomical objects are not included with Celestia. Variable stars, supernovae, black holes, and nebulae are missing from the standard distribution. Some are available as add-ons.

Although objects that form part of a planetary system move, and stars rotate about their axes and orbit each other in multiple star systems, stellar proper motion is not simulated, and galaxies are at fixed locations. As a result, the constellations in Celestia do not gradually change shape as they do in the real world. In addition, Celestia's binary star catalogs only describe a few hundred systems of multiple stars. Most binary star systems cannot be simulated because adequate orbital information is not yet available.

Celestia does not include any stars that are more than a few thousand light-years from the Sun because the parallaxes of more distant stars are too small to be accurately measured by the Hipparcosastrometric satellite. In addition, objects in solar systems are only drawn to a distance of one light-year from their suns, and Celestia does not consider the wobbling of some stars induced by their planets.

Wavelength filtering is not implemented in Celestia's engine. The actual rendering tries to match human vision at the observer's position as accurately as possible. This means false-color maps and multi-color nebulae are not part of the official distribution. Camera artifacts such as lens flare and glare are not rendered.

Celestia also does not simulate gravity. For example, a near-Earth object approaching the Earth will not be deflected by the Earth's gravity unless the person who defined the NEO's trajectory for Celestia included that effect.

Most real-world spacecraft such as Voyager 2 are not available in Celestia but are provided as add-ons by users.

Celestia uses the Julian calendar and cannot go back or forward more than 2 billion years, and the default time-setting system cannot go further than the years -9999 or 9999. 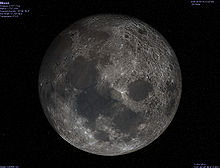 A high-resolution texture of the Moon, including a normal map

Well over 10 GB of extensions are available in addition to the base program, produced by an active user community.[17][18]

Numerous scripts are available. These include simple tours, reconstructions of complex space missions such as Cassini–Huygens and Deep Impact, and scripts showing useful information, like size comparisons, or particular events such as multiple simultaneous eclipses of Jupiter's moons or the evolution of a star.

Fictional universes can be depicted, with planetary systems and 3D models—films such as 2001: A Space Odyssey, Star Trek and Star Wars, and TV shows including Stargate SG-1 and Babylon 5. Add-ons illustrating less well-known Web fiction, like Orion's Arm, or role-playing games, like 2300 AD, and personal works by members of the Celestia community depicting fictional solar systems with inhabited worlds, spacecraft, cities, and special effects can also be added. 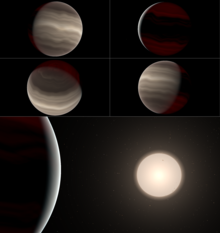 Addon for the Hot Jupiter exoplanet "NGTS-12 b"

Educational add-ons can also be implemented in different languages. These activities provide approximately 40 hours of space journeys and astronomical lessons to include extensive tours of the Celestia universe, the complete life cycle of stars, the solar system, the human space program, the Search for Extraterrestrial Intelligence (SETI), and depictions of astronomical events such as the formation of our moon billions of years ago, and the possible terraforming of Mars in the future.[19][note 2]

NASA and ESA have used Celestia in their educational[23] and outreach programs,[24] as well as for interfacing to trajectory analysis software.[25]

Celestia was used in the media by the CBS television show NCIS (Season 4, Episode 22: "In the Dark"). Character Timothy McGee explains what Celestia is and how an add-on can allow the user to store a diary within the program, as well. Textures designed by Celestia graphic artists were used in the movie The Day After Tomorrow and the 2008 miniseries The Andromeda Strain. Celestia has also appeared on the Science Channel's Through the Wormhole. Eurogamer's Jim Rossignol named Celestia among a top 20 list of Summer of PCFreeware games in 2006.[26]

I Walked to Celestia - Genshin Impact

Love letter to a friend