Why Choose a Blackfin Processor?

Blackfin® embodies a new breed of 16/32-bit embedded processor with the industry's highest performance and power efficiency for applications where a convergence of capabilities – multi-format audio, video, voice and image processing; multi-mode baseband and packet processing; and real-time security and control processing – are critical. It is this powerful combination of software flexibility and scalability that has gained Blackfin widespread adoption in convergent applications such as digital home entertainment; networked and streaming media; automotive telematics and infotainment; and digital radio and mobile TV.

Introduction to the Blackfin Processor

The MULTI Integrated Development Environment for the Blackfin Processor includes both the Analog Devices VisualDSP++® compilers* (for highest performance on DSP algorithms) and Green Hills Optimizing compilers (for extended debugging capabilities and for highest reliability on large codebases).

The compiler distribution includes a comprehensive suite of run-time libraries for C and C++. Distributions include several different versions of the C++ libraries for Embedded C++ (EC++) with and without templates and exceptions. Full featured start-up code and libraries include automatic copy of data from ROM to RAM and system call emulation. Source code to the run-time libraries is available so that users can customize routines according to the special needs of their applications.

Of Interest for Blackfin Processors

MULTI provides a host-based (Windows PC or UNIX workstation) graphical environment for Blackfin Processor target development. Host-target connectivity is provided through a variety of means, depending on the target environment. MULTI supports Blackfin Processor evaluation boards that can be accessed through:

This article is about the DSP microprocessor. For other uses, see Blackfin (disambiguation).

The Blackfin is a family of 16-/32-bit microprocessors developed, manufactured and marketed by Analog Devices. The processors have built-in, fixed-point digital signal processor (DSP) functionality supplied by 16-bit multiply–accumulates (MACs), accompanied on-chip by a microcontroller.[1] It was designed for a unified low-power processor architecture that can run operating systems while simultaneously handling complex numeric tasks such as real-timeH.264video encoding.[2][3]

Blackfin processors use a 32-bitRISCmicrocontroller programming model on a SIMD architecture, which was co-developed by Intel and Analog Devices, as MSA (Micro Signal Architecture).

The architecture was announced in December 2000, and first demonstrated at the Embedded Systems Conference in June, 2001.

It incorporates aspects of ADI's older SHARC architecture and Intel's XScale architecture into a single core, combining digital signal processing (DSP) and microcontroller functionality. There are many differences in the core architecture between Blackfin/MSA and XScale/ARM or SHARC, but the combination was designed to improve performance, programmability and power consumption over traditional DSP or RISC architecture designs. 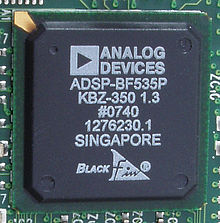 What is regarded as the Blackfin "core" is contextually dependent. For some applications, the DSP features are central. Blackfin has two 16-bit hardware MACs, two 40-bit ALUs and accumulators, a 40-bit barrel shifter, and four 8-bit video ALUs; Blackfin+ processors add a 32-bit MAC and 72-bit accumulator. This allows the processor to execute up to three instructions per clock cycle, depending on the level of optimization performed by the compiler or programmer. Two nested zero-overhead loops and four circular buffer DAGs (data address generators) are designed to assist in writing efficient code requiring fewer instructions. Other applications use the RISC features, which include memory protection, different operating modes (user, kernel), single-cycle opcodes, data and instruction caches, and instructions for bit test, byte, word, or integer accesses and a variety of on-chip peripherals.

The ISA is designed for a high level of expressiveness, allowing the assembly programmer (or compiler) to optimize an algorithm for the hardware features present. The standard Blackfin assembly language is written using an algebraic syntax: instead of prefix commands used in many other assembly languages.

The Blackfin uses a byte-addressable, flat memory map. Internal L1 memory, internal L2 memory, external memory and all memory-mapped control registers reside in this 32-bit address space, so that from a programming point of view, the Blackfin has a Von Neumann architecture.

The L1 internal SRAM memory, which runs at the core-clock speed of the device, is based on a Harvard architecture. Instruction memory and data memory are independent and connect to the core via dedicated memory buses, designed for higher sustained data rates between the core and L1 memory.

Portions of instruction and data L1 SRAM can be optionally configured as cache independently.

Certain Blackfin processors also have between 64KB and 256KB of L2 memory. This memory runs slower than the core clock speed. Code and data can be mixed in L2.

Coupled with the core and memory system is a DMA engine that can operate between any of its peripherals and main (or external) memory. The processors typically have a dedicated DMA channel for each peripheral, which is designed for higher throughput for applications that can use it, such as real-time standard-definition (D1) video encoding and decoding.

The architecture of Blackfin contains the usual CPU, memory, and I/O that is found on microprocessors or microcontrollers. These features enable operating systems.

All Blackfin processors contain a Memory Protection Unit (MPU). The MPU provides protection and caching strategies across the entire memory space. The MPU allows Blackfin to support operating systems, RTOSs and kernels like ThreadX, μC/OS-II, or NOMMU Linux. Although the MPU is referred to as a Memory Management Unit (MMU) in the Blackfin documentation, the Blackfin MPU does not provide address translation like a traditional MMU, so it does not support virtual memory or separate memory addresses per process. This is why Blackfin currently can not support operating systems requiring virtual memory such as WinCE or QNX.

Blackfin supports three run-time modes: supervisor, user and emulation. In supervisor mode, all processor resources are accessible from the running process. However, when in user mode, system resources and regions of memory can be protected (with the help of the MPU). In a modern operating system or RTOS, the kernel typically runs in supervisor mode and threads/processes will run in user mode. If a thread crashes or attempts to access a protected resource (memory, peripheral, etc.) an exception will be thrown and the kernel will then be able to shut down the offending thread/process. The official guidance from ADI on how to use the Blackfin in non-OS environments is to reserve the lowest-priority interrupt for general-purpose code so that all software is run in supervisor space.

Blackfin processors contain an array of connectivity peripherals, depending on the specific processor:

All of the peripheral control registers are memory-mapped in the normal address space.

ADI provides its own software development toolchains. The original VisualDSP++ IDE is still supported (its last release was 5.1.2 in October 2014; 7 years ago (2014-10)), but is approaching end of life and has not had support added for the new BF6xx and BF7xx processors. The newer toolchain is CrossCore Embedded Studio, which uses supports all Blackfin and Blackfin+ processors using upgraded versions of the same compiler and tools internally, but with a UI based on Eclipse CDT. No free version of either tool is available; a single-user license for VisualDSP++ costs $3500 USD, and CrossCore Embedded Studio $995 USD.

Blackfin was previously supported by μClinux and later by Linux with the NOMMU feature, but as it was not ever widely used and no longer had a maintainer,[8][9] support was removed from Linux on April 1, 2018; 4.16 was the last release to include Blackfin support.[10][11][12]