For those who have not yet had the privilege of knowing Oshun, the benevolent and venerated Yoruba goddess: May you one day experience the strength in her power, the beauty of her undying love, and the magical rhythm flowing through her sacred waters. This goddess is very much alive; her feminine essence resides in the rivers of the world and in the hearts of those who call upon her energy today and every day.

Developed among the people of Nigeria and Benin, the Yoruba faith consists of ritual practices that include singing, dancing, spiritual possession, and healing ceremonies. It is said that the day we are born, each of us are accompanied by an Orisha, "owner of our head,” who serves as a lifelong protector. In the United States, Latin America, and the Caribbean, seven of the many Orishas are referred to as “The Seven African Powers.” Among them are Eleggua, Obatala, Yemaya, Oya, Oshun, Shango, and Ogun. We’re said to share personality traits with our Orisha, who ultimately helps us learn more about ourselves in order to lead an effective life.

The Yoruba faith has been a part of my life for as long as I can remember. My grandmother was a complete devotee of Shango, and my parents always had altars for the Orishas in different parts of our house. When I was 20 years old, I went to see a Babalawo (high priest) to receive my guardian Orisha. Despite my love for every single one of them, I was secretly hoping it would be Oshun. I grew up invoking her spirit through rituals and offerings, and to this day, she has never once failed me—which is probably why I wasn’t surprised when the Babalawo told me she was my mother. I remember soaking it all in, feeling like a goddess in the flesh.

Oshun—the goddess of love, beauty, and fertility—is the youngest Orisha and one of the most adored in the Yoruba religion. According to the patakís (sacred stories left to us by our ancestors), she was brought into existence by Olodumare, the Supreme Creator, once he realized something crucial was missing after creating the earth: sweetness and love. As one of the ancient Yoruba myths suggests, the human race would not exist if Oshun had been sent to our world. It is said that her sweet and fertile waters brought life back to humanity.

Oshun exudes sensuality and all the qualities associated with fresh, flowing river water. Her sparkling charisma can light up a room, and her lush womanly figure suggests fertility and eroticism. Oshun’s favorite thing to eat is honey, and her contagious laugh can either put you under her spell or send shivers down your spine. Despite her generosity and irresistible charm, this Orisha is also the most dangerous when crossed—Oshun is as sweet as honey, but her honey can also turn sour. What’s interesting about this goddess is that beneath her charming beauty and loquacious demeanor, there is a feeling of sadness and loneliness. The patakís say Oshun is often heartbroken because she loves with every fiber of her being, and yet she never finds someone who can love her the same way back.

It’s no coincidence Oshun is also the referred to as the queen of the witches: She is a teacher of both magic and mysticism. Oshun loves casting spells, especially those related to romance and seduction. She is the granter of wishes and all of your heart’s desires. When respected and properly invoked, Oshun holds the keys to love, success, prosperity, and pregnancy. That said, if you’re trying to invoke this goddess, make sure you always keep her happy. In other words, do not make Oshun a promise you cannot keep. Love her; be loyal to her and be mindful of your wishes. She is the goddess of love, after all.

They say Oshun is an extremely beautiful woman dressed in gold, covered in jewels with a pot of honey around her waist (pun intended). Her traditional colors are yellow, gold, coral, amber, and she associated with the number five. Oshun often carries a mirror so that she can admire her beauty. She loves honey, sunflowers, oranges, cinnamon, and pumpkin. The peacock and the vulture are her favorite birds.

Here are some of my favorite rituals to invoke the Yoruba goddess.

(Please note: the more specific you are with your wishes, the better. If you don’t have an altar with some of Oshun’s favorite things as I mentioned above, make sure you have at least one representation of her, i.e., a holy card, photo, or sculpture. Feel free to be flamboyant with your rituals. Oshun loves to be adored.)

Directions: Light the white candle in front of a sculpture or image of Oshun for five days. (Make sure you put the candle in a safe place. If you plan on leaving it unattended, blow it out, but light it again as soon as you return.) Tell her your wishes, preferably out loud so she can hear you. After lighting the candle, remove all the sunflower petals and put them inside your bowl. Sprinkle cinnamon over the petals, then add a drizzle of honey and a few drops of perfume. After you take a shower, put some water into the bowl, together with the ingredients, and pour it over yourself from the neck down. Close your eyes and ask Oshun to bring love into your life.

Directions: Light the yellow candle in front of a sculpture or image Oshun for five days. (Make sure you put the candle in a safe place. If you plan on leaving it unattended, blow it out, but light it again as soon as you return.) Tell her your wishes, preferably out loud so she can hear you. After lighting the candle, make a round opening on top of your pumpkin. Write the same wishes you told Oshun on a piece of brown paper bag with a pencil. Put it inside the pumpkin and seal the top with candle wax. Place the pumpkin over your stomach and ask Oshun to help you conceive. Afterwards, take your pumpkin to the nearest river as an offering. Let your candle burn itself out.

Directions: Light the yellow candle in front of a sculpture or image of Oshun for five days. (Make sure you put the candle in a safe place. If you plan on leaving it unattended, blow it out, but light it again as soon as you return.) Tell her your wishes, preferably out loud so she can hear you. Place the oranges on the white plate. Pour several drizzles of honey over the oranges. Sprinkle cinnamon on top. Leave this, together with the yellow candle, throughout the five days. Put the plate in front of Oshun. When the days are up, you may dispose of the offering.

Eleggua is the view that follows a path, messenger of the gods and the first protection.

God of the roads, the crossroads and the opportunities. Open and close the doors and find the right ways to generate strength and unfoldment.

Elegúa, the deity who holds the key to our happiness in Osha

It is Eleguá the goalkeeper of the savannah and the mount. In nature, it is symbolized by rocks.

The sons of Eleguá Unlike other Orishas, ​​they often receive many negative qualities, they are accused of quarrelsome and lack of morals, but the reality is that they are wonderful people, like everyone, they have defects, but they also possess many qualities that allow them to have a very sweet character. , charismatic and moving.

Characteristics of the Omo (sons) of Elegúa:

To the children of this Orisha characterizes them cunning, intelligence and skill.

They have a very particular temperament, they are very eloquent and outgoing.

Talkers by natureThey have a good word to communicate easily and tend to be very persuasive when they need to convince someone.

They are very Restless, they like a lot to walk, to travel, to be outside the house and to visit many places. They are characterized by great mental agility, are very social, and have a very flexible mentality.

Their actions can sometimes have the innocence of a child, because they are restless, creative and curious. They get bored easily and need constant changes in the different areas of their life.

They can have very moody characters, and vary in mood easily. They love attract attention, give an opinion, receive praise, praise and cause admiration in others.

The children of the Orisha Elegguá in love and relationships:

In love the children of EleguáThey are also usually unstable and bored by the everyday, they remain in the incessant search for new challenges.

They don't compromise easilyThey do not like commitments and tend to be unfaithful.

They are in love, and they can easily lose interest.

Su restless spirit makes them good entrepreneurs, they easily identify opportunities and their status as innate communicator It makes them stand out from the rest.

Learn all about Eleguá, attentions, offerings and more: 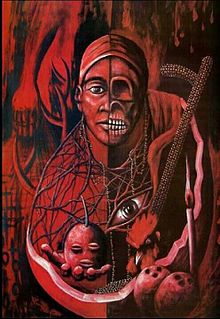 Elegua (Yoruba: Èṣù-Ẹlẹ́gbára, also spelled Eleggua; known as Eleguá in Latin America and Spanish-speakingCaribbean islands) is an Orisha, a deity of roads in the religions of Santería, Umbanda, Quimbanda, and Candomblé. He is syncretized with Saint Michael, Saint Anthony of Padua, or Holy Infant of Atocha.[1][2]

Elegua is known as Èṣù-Ẹlẹ́gbára in the Yoruba religion and is closely associated with Eshu. Ẹlẹ́gbára means the "master of force" in the Yoruba language.[1][2]

Eleguá is known in the Dominican Republic, Haiti, Cuba and Puerto Rico as the orisha and "owner" of caminos, or roads and paths. All ceremonies and rituals in Santería must first have the approval of Eleguá before progressing. He is the messenger of Olofi. Within the "Regla de Ocha" [Cuba], he slightly differs from Echu, who in this case is seen as his brother, by having less dangerous and less aggressive characteristics. Eleguá moves silently; in contrast, Echu "breaks through". Manifestations of Eleguá includes Akefun, Aleshujade, Arabobo, Awanjonu, Lalafán, Obasín, Oparicocha, and Osokere.[2]

There is a patakí (story) in Santería in which Olodumare gives Eleguá the keys to the past, present, and future; for this reason, Eleguá is often depicted holding a set of keys. A figure of Eleguá may be placed in the house behind the entrance door.[2]

In Afro-Brazilian religion Elegbara is one of the titles of Exu.[2]