Check out the Table of Contents or Imagesfor THE SPIRAL WARS wiki —- a community encyclopedia. Anyone can add content and edit. BEWARE OF SPOILERS!!

abbreviations used for quotes and excerpts

Jump to Table of Contents

“The sard are bad,” said Romki. “The krim were worse. The reeh are worse again, and many times more powerful than the krim and sard at their very height combined.” (Defiance -32)

The Ancients — A mystery. Lived millions of years ago. Little is known. Are they extinct or have they ascended, moved elsewhere...?

“the Ancients’ Meridian modelled much of the near Spiral.... The whole thing was more than three million years old. What had happened to the race that built it, and other monuments like it across the Spiral, no one knew. Their homeworld remained unknown, and no working settlement, nor sign of actual civilisation, had ever been found. There were countless theories, but no one even knew what the Ancients had looked like.” (R-20)

"Merakis — for reasons unknown to anyone — had found the favour of the Ancients, a fact that had in turn made it a magnet for every spacefaring species to rise to prominence in this part of the Spiral." (R-19) Long after the Ancients, Merakis changed hands from The Fathers to the parren to the chah'nas to the tavalai and is now in human space (R-19).

They disappeared “fifty-thousand years ago” (R-13), exterminated by the machine-race they created 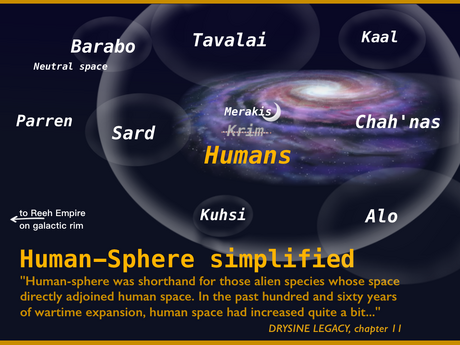 dogreth — First appeared in Qalea Drop guarding the ancient lestis temple… enormous shoulders and meaty fists, compound eyes that glistened like the shimmering glass....narrow yellow eyes....short snout (QD-9) Reptilian-eyed dogreth ... chattering and snorting to each other as they worked, with powerful arms and brawlers' shoulders, never seeming to laugh or smile. (QD-9) Dogreth served the reeh offworld, as did other Eshir species, and those networks of reeh servants and slaves worked to feed information downworld through informal and often dangerous channels.“(QD-24)

kaal — See kaal page. Minor role as tavalai allies. However, the heavy descender pilot in Kantovan Vault was a kaal

qwailash — First appeared in Qalea Drop. Qwailash Sector. Fighting Pit beneath the city. Kinda nocturnal. Physically slow. thick-shelled and round-shouldered qwailash, hard-shelled... Both qwailash were tall, giant land crustaceans with triple-segmented bodies. The rear segment was flat to the ground, with four scuttling legs for propulsion. Above that, the main body stood, with four more big arms, two of them huge with wide claws, and a head that was barely recognisable as belonging to a sentient being, mostly compound eyes on stalks, multiple long antennae and a cluster of small claws about armoured mouthparts. Awkward on land, they preferred water... 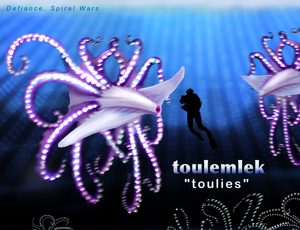 toulemlek / toulies — Featured in Defiance as fascinating aquatic creatures who genetically encode memories, passing them down through their descendants for millennium. They may possibly be sentient, or just specifically gifted but non-sentient animals. Squid-like, with wings like a ray. Communicates with flashing lights. Remembers patterns forever, to the nth digit. Live in the sea on the moon Cephilae, Cason System, in parren House Fortitude space. “Cephilae is a scientific curiosity. There are interesting life forms there animals that live in the seas. Intelligent animals, but animals all the same. Scientists study them” (D-7). Sergeant Lai of Phoenix Company dubbed them "toulies" (D-10)

trento — brief appearance in Qalea Drop. A trento just sat, looking over the bikes on the landing zone, a blanket over his legs and smoking a long pipe beneath his long snout.

Unknown -- lots more species out there...

“I count eight,” Jokono confirmed. “I see two kratik, three shoab, one kuhsi, and… I don’t recognise those last two.”

Peletai were insectoid, Dale saw, catching a glint of chitinous shell past loose clothing. He’d heard of them, but like so much of the tavalai-sphere, it was all so far away from humanity.

“I have never seen peletai,” Jokono confirmed without a hint of bother. “Tell us of them.” 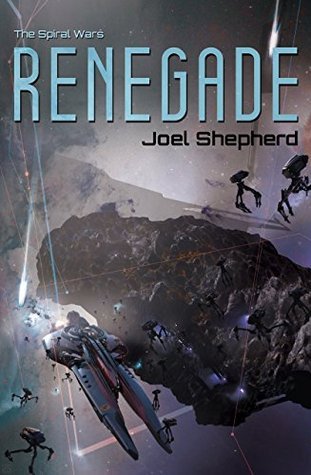 1,000 years after the Earth is destroyed in an unprovoked attack by an alien species, humanity has finally won a long and grueling war to carve its own place in the larger galaxy. However, in the middle of celebrations on the new Homeworld, renowned war hero Captain Marinol Pantillo of the flagship carrier Phoenix is abruptly arrested and killed, and his junior Lieutenant Commander Erik Debogande is framed for the murder. Rescued by Major Thakur of the Phoenix's Marine detachment, Erik must flee with his ship and crew from their former compatriots, as they uncover a conspiracy that led to their captain's murder. Eventually, they stumble onto an even bigger plot that not only threatens war but the end of everything they love.

The series thus far is comprised of the following novels: