# Smule
1. On buying this voucher you will get a code through which you can take the Smule 12 months subscription.
2. Valid at Smule app.
3. Valid for 6 months.
4. To redeem your Smule Voucher go to www.smule.com/s/voucher/redeem and enter your email ID and Smule Voucher details. (Please note that if you are a new user you should download the Smule app and register before the redemption.)
5. This service is only available on iOS and Android platforms.
6. Smule Voucher offers a premium Smule VIP subscription. VIP pass takes fun to a new level giving shared access for both iOS and Android with no ads appearing.
7. Smule VIP users can customize their profiles and tailor sound with vocal filters sing and solo the complete songbook of 3M+ tracks.
8. Connect with music lovers worldwide over 50M+ strong worldwide and sing 10M+ of karaoke songs for free on Smule the social singing app.
9. Practice singing duet solo or Capella karaoke songs with our Smule community or your favourite stars.
10. Add or make your own audio or visual effects with our companion app Style Studio by Smule.
11. Sing live with friends and support the rest of the community by sending the Smule voucher.
12. The Voucher is open to Indian residents above 18 years of age only.
13. Qwikcilver & Smule reserve the right to terminate modify or extend the timelines and features at any time at its absolute discretion without assigning any reason.
14. Voucher offers are subject to promotional availability. This Voucher has no monetary value is not transferable is not for sale or re-sale nor redeemable for cash.
15. Smule accepts no responsibility financial or otherwise for the misuse of the Voucher.
16. The Smule subscription is subject to the Smule Terms of Service and related policies located on the Smule website.
17. Cashback will not be processed for NON-KYC users. Get your KYC done to receive the cashback. Visit http://m.p-y.tm/minkyc to do your KYC in a single click. Please ignore if already done.
To redeem your Smule Voucher go to www.smule.com/s/voucher/redeem and enter your email ID and Smule Voucher details.
Open the voucher from the 'My Orders' section of the Paytm app or via mail (registered email id).
This product cannot be returned or replaced once delivered.
Have a query and need help? Click here.
Your money is yours! All refunds come with no question asked guarantee.
At Paytm, we provide 100% assurance. If you have any issue, your money is immediately refunded. Sit back and enjoy your shopping.
Happiness is guaranteed at Paytm. If we fall short of your expectations, give us a shout.
Cashback would be added as Paytm Cash, which is One97 Communications Ltd’s loyalty program. It can be used to pay for goods & services sold by merchants that accept ‘Pay with Paytm’
Sours: https://paytm.com/shop/p/qc-DEAQCQWIK86179346E34683?src=consumer_grid&svc=-1&tracker=%7C%7C%7C%7C%2Fg%2Fdeals-for-you%2Fentertainment-glpid-175945/catalog%7C175945%7C3%7C%7C
Why can you offer a Smule VIP subscription that is cheaper than the prices on the App Store and Play Store?

If you buy from the Apple App Store or Google Play Store, Apple and Google receive a 30% commission on your purchase.
That’s why the prices on the App Store and Play Store are more expensive.

What is the difference between Android VIP and iOS VIP?

What should I do if I want to buy VIP from GetVipSmule.com?

Before making a purchase, please make sure that your Smule Account is no longer VIP.

Please make sure that you have cancelled your current Smule VIP subscription on your App Store or Play Store.
So, you won’t be charged automatically for another monthly or yearly subscription.

No. All recordings and followers aren’t touched at all.
We only activate the VIP status.
Your Smule account remains safe.

If my Smule account is still VIP, can I buy VIP or do I have to wait until my current VIP expires first?

If your Smule account is still VIP now, DO NOT BUY.
Please wait until your current VIP expires first.

If my Smule account is only VIP on Android, but not VIP on iPhone or iPad, can I buy an iOS VIP?

Yes. You can buy an iOS VIP for iPhone or iPad, because your Smule account is only VIP on Android devices, but not VIP on iOS devices.

What payment methods do you accept?

We accept payment through PayPal, a well-known, trusted, and secure way to make payments over the Internet.

How long will it take to activate VIP on my Smule account?

Our time zone is UTC+07:00. Also known as Indochina Time (ICT).
It is 7 hours ahead of Coordinated Universal Time (UTC).

Our business hours are as follows:

There is a possibility that when you make a purchase, our time in Asia is midnight or early morning.
Thus, the VIP activation process will take up to 8 hours, due to time zone differences.

Will my VIP subscription automatically renew next year?

No. There is no auto-renewal.
After your VIP subscription period ends next year, you may visit our website to make a purchase again.

What is the cost to sing on Smule?

Can I sing for free on Smule or do I need a VIP subscription?

Basically, Smule can be used permanently without a VIP subscription and at no cost. The basic idea at Smule is that first a singer sings a vocal track of a song and then a second singer sings the second vocal track. The limitation that you have without a VIP subscription is that you sing along with other singers as a second singer. Without a VIP subscription it is not possible to be the first singer to open your own songs or to sing songs completely individually. This is only possible with a VIP subscription. In addition, as a VIP user you have a higher selection of effect settings. However, both the VIP user with the "Super Studio" effect and the non-VIP user with the "Studio" effect have the same most important reverb available. The VIP user has the option to set it a little more precisely, but this is not absolutely necessary.

However, for the basic principle of Smule, it is important that there are enough users who sing along with other users. It would be a shame if a singer opened a song without a second singer singing along. So it wouldn't make sense if every singer just opened songs and sang the first track. The Smule idea therefore benefits when there are not only paying users, but also a higher number of non-paying users. So don't be afraid to sing on Smule, even if the cost of a VIP subscription seems too expensive.

Experience has shown that the cost of a VIP subscription varies quite regularly. Users also report that older accounts with which a VIP subscription had already been concluded receive individually lower prices than new users. Prices also differ from country to country.

If you conclude a VIP subscription via the Smule website, this subscription can be used on Apple iOS devices such as iPhone and iPad as well as on Android smartphones.

If you conclude the VIP subscription via the Apple App Store or the Google Play Store, the costs for an annual subscription can be significantly more expensive.

Why is Smule so expensive?

If you do not buy your VIP access via the Smule website, the costs for this are significantly more expensive.

If you buy from the Apple App Store, Apple receives a 30% commission on your purchase. The situation is similar under Android in the Google Play Store. In addition, Smule has to transfer levies to license holders of the karaoke songs, so that the entire amount does not end up with Smule itself.

For this reason, it is in Smule's interest that VIP subscriptions are concluded through the website. A higher proportion of the amount paid goes directly to Smule and the costs are lower for you.

How can I cancel a Smule subscription?

If you have incorrectly completed a subscription, you can contact the official Smule Support . Select "Disable Auto-renewal" here to contact Smule Support to prevent automatic renewal of the subscription. By selecting the item "Refund Request" you can request a refund if, for example, the Smule app does not work properly on your smartphone.

If the article has not answered all questions, you can also contact me.

*On this page, I share my personal experience with my own personal experience. If articles such as technical equipment are presented, this is not sponsoring by the manufacturer. Nevertheless, I reserve the right to put affiliate advertising links to shopping sites. In the case of product sales on the linked website, the website operator receives a small commission - of course, without the article for the buyer is thereby more expensive. Affiliate advertising links are marked with an appropriate *.

Sours: https://www.anditasten.de/en/smule-costs
how to sing in smule without the VIP subscription

Previously only available in the US, the VIP subscriptions through smule.com are now available in over 100 countries around the world: http://bit.ly/getSmuleVIP

Monthly and yearly subscriptions are available and usually cheaper than the respective prices in the Apple and Google Play store. And there is another advantage: VIP subscriptions bought through smule.com can be used on iOS and Android devices at the same time! 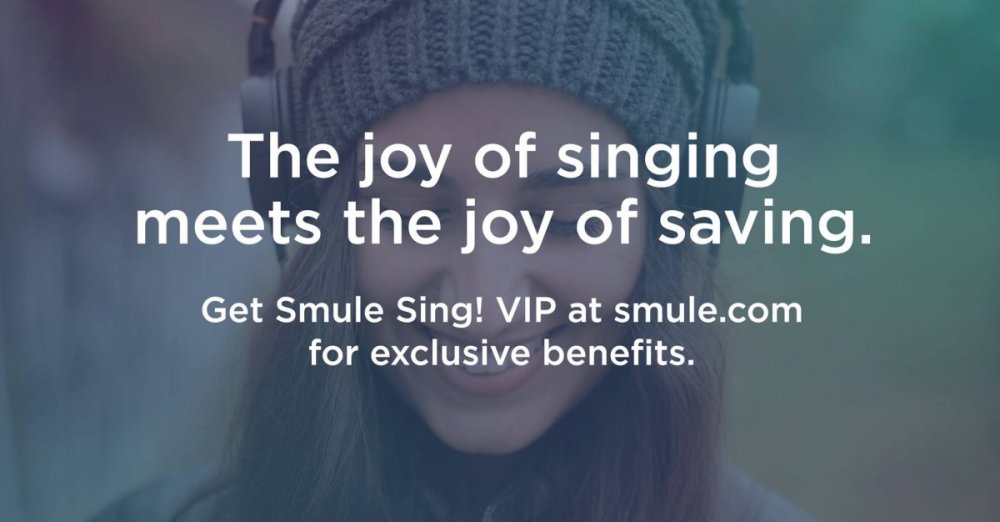 How to Cancel Your Smule Subscription On Desktop?