Bluebird Azurite, or Bluebird for short is the fusion of Aquamarine and Ruby (Eyeball). She made her debut in the episode of the same first name.

Bluebird Azurite is short in stature with four legs. She has blue skin with red and turquoise patches, a singular dark blue eye and red-brown hair styled in a round cut with a "dent" above her forehead.

She wears a long-sleeved sports coat that is light blue on the left and red on the right with a white collar and a navy blue tie. She also wears blue pants and four dark red boots. Her gemstones are located in her left eye and cheek respectively.

At first, Bluebird seemed to be very kind and sweet, offering Steven food and hanging out with other Gems even though she was a bit of a prankster. Steven assumed Bluebird was up to no good after recognizing the placement of her individual gemstones and his assumptions were later proven to be true: she revealed herself as very cruel when she dangled Steven's father Greg off the roof of the Beach House just so she could get his attention. She later attacked Steven without hesitation, showing how powerful her components' grudge towards him was.

Nothing is known of Bluebird Azurite's history yet

Cutlass Proficiency: Bluebird Azurite can summon an ice cutlass, which she uses to fight. She pulls it out of Eyeball's gemstone, indicating that the weapon is an enhanced form of Eyeball's chisel knife. So far Bluebird is shown to be very proficient in using her weapon, easily attacking Steven multiple times with it.

*Cryokinesis: Additionally she can shoot ice projectiles from her sword, which shift into copies of the sword that generate icy spikes upon hitting a target.

*Water Wings: An ability from Aquamarine she can summon four water wings on her back to fly. In some shots, they are noticeably larger and sharper.

Bluebird holds a mutual hatred for Steven since her components fused to get revenge on him due to his changing of Homeworld causing her components to be cast out by the rest of their society.

Bluebird is originally seen watching a horror movie and having fun with Greg. However, it is shown that she was only trying to lure everyone into trusting her, later using Greg as bait for Steven to come out of his house and her components forced him to cut off his hair.

Bluebird fakes being nice to the Crystal Gems, which convinces them to trust her. When Bluebird reveals her true colors, Garnet, Amethyst, and Pearl fuse into Alexandrite and crush her.

Biggs Jasper, her vision appears to be unaffected (possibly implying that Gems have eyes to emote, and do not need them to see). 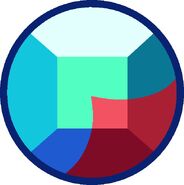 So, Steven had just left Beach City. Everyone and every gem are still a bit sad about his departure, but they are all still determined to continue following his message for peace and love. Meanwhile, the Crystal Gems are still running Little Homeschool in order to help gems use their abilities for good, and the Diamonds and Spinel have returned to Homeworld.
Everything and everyone is doing fine... well, all except one orange nose gem.
Jasper is having a bit of a rough time now that Steven, a once proclaimed new purpose, is now gone. With no one to protect and serve, what is a gem like her to do in these peaceful circumstances?
As it turns out, a whole lot of things. If she's willing to drop her guard and try them at her own pace.
From awkward reunions to attempts at trying new things, Jasper's reluctant determination is the key figure in driving her to try and see what else lies beyond.
And if all comes crashing down on her? Well at least you can't say she didn't try.

Gorgeous Azurite Malachite cabochons and some have rare red Cuprite.

These stone cabochons for jewelry making are a colorful combination of copper semiprecious gemstones. Azurite is a deep royal blue, and Malachite is a rich green, and Cuprite is a dark blood red.

The word Azure is derived from the Arabic word for blue. Malachite gets its name from the Greek, malache, "mallow" in reference to its green leaf color. Cuprite is named from the Latin, cuprum, meaning copper.

These stunning Azurite-Malachite and Azurite-Malachite-Cuprite cabochons are custom cut from lapidary material from the Bluebird Mine, near the town of Miami in Gila County, Arizona. The copper mine was discovered in 1900. It is currently owned and operated by the Cyprus Miami Mining Corp.

Metaphysical Properties of Azurite-Malachite and Cuprite:

Azurite is believed to stimulate intellect as well as intuition, and is great for those studying new or challenging subjects. It t is said to help one be more clear and truthful with themselves and others.

Malachite is a protective stone. It is believed Malachite can counteract self-destructive romantic tendencies and help encourage true love.

And Cuprite assists us in dealing with female relationships, mother, sister, daughter, wife or a female partner.