Get on target for hunting season! Whether you use our life size animals with swing out vitals or just an 8", 10” or 12” rifle grade gong to get the confidence you need for that perfect kill shot. We have just what you need. 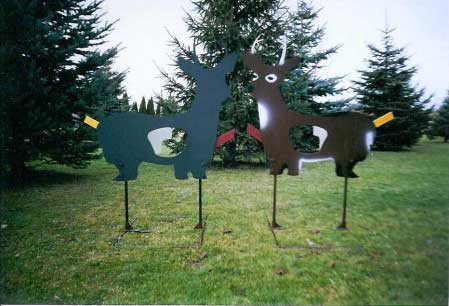 Would you like to shoot METAL TARGETS for FREE?

Just send us an email with your complete "ship-to" address and we'll send you a RIFLE grade knockdown for you to play with. No cost to you--just use our COMMENT LINE in CONTACT US and send the ship-to address for one free knock-down (rifle-grade steel plate). ENJOY THE EXCITEMENT AND ACTION OF SHOOTING STEEL!

Shipping All Across the United States!

LAW ENFORCEMENT, MILITARY (CURRENT & RETIRED), RANGES/CLUBS, & REPEAT CUSTOMERS **CONTACT US FOR YOUR 10% off DISCOUNT CODE**. WE THANK YOU ALL FOR YOUR SERVICE AND RETURN BUSINESS!

WE HAVE RECENTLY RENEGOTIATED
NEW LOWER SHIPPING RATES PASSING THAT SAVING ON TO YOU!
WE WILL CUSTOM MAKE
TARGETS TO FIT YOUR NEEDS! CONTACT US TODAY!

Our products have been designed to maximize your shooting enjoyment. The plates are painted with high-visibility colors, and stay firmly positioned at excellent shooting heights. We have even developed an automatic reset target that resets without levers or ropes - just shoot at the reset plate and you're ready for another set.

We invite you to view our Made in the USA products. If you have any questions just ask us and to truly enhance your target shooting experiences order our targets - we know you'll be pleased!

Read more about Metal Spinning Targets, Inc., and what our customers say about us. 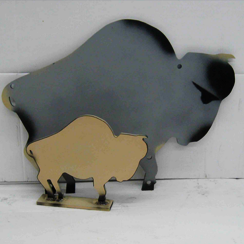